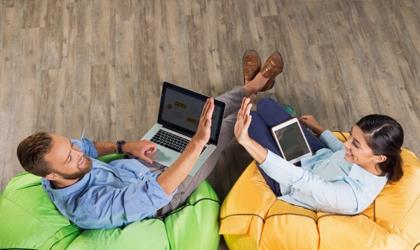 The Pursuit Of Happiness

Stress is an emotion which is generally accompanied with anxiety, and is naturally present within all of us in some proportion. It helps us to be positive, which in turn determines our happiness levels. 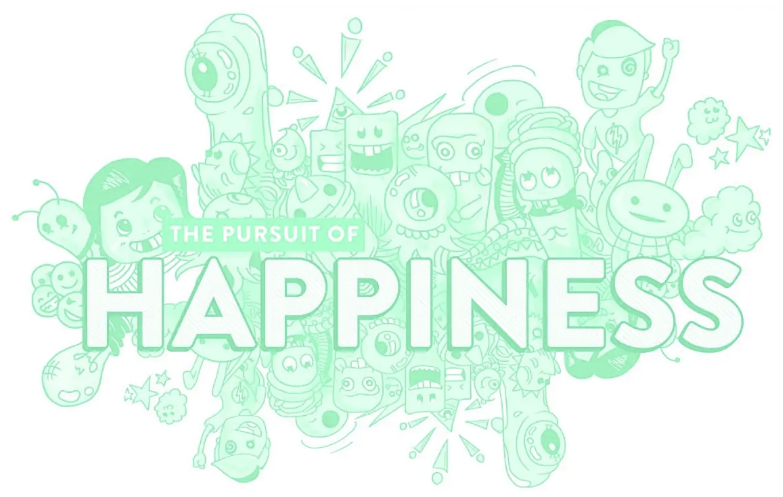 With endsems already upon the students and the study rooms occupied to their fullest, everyone has been gripped by “The Semester Dream” – the one tiny hope in the back of their minds that somehow, despite not having studied as much as they would have liked, their CPI would see a spike this semester. This is the time of the year when the canteen owners witness business at its peak, courtesy stress-eating and an elevated caffeine intake, and sleep cycles go for a toss as there is a scramble to catch up with the seemingly unending endsem syllabus. Even though stress levels reach a spike during this period, a semester full of ‘headlines and deadlines’ ensures that the in-semester stress is no less. Constantly under pressure from parents, peers and especially themselves to fare better than the best, it isn’t always a smooth ride for the students at IIT Bombay. Measuring happiness or stress levels is at least as difficult as catching rare and elusive butterflies. But with trustable precedents to look up to, we correlated a few factors which are crucial during the students’ stay here with their perception of contentment. Different individuals have different natural responses to stress-inducing stimuli they are subjected. As a result, it is inevitable that happiness and stress levels fluctuate across the student demographic. Insight set out to investigate this through a first-ever psychological survey on campus conducted in classrooms across three years for UGs (excluding fourth and fifth years) last year. Keep on reading to know the findings of this study. The survey was adapted from the Oxford Happiness Questionnaire to appropriately gauge the happiness and stress levels here. To do this, we’ve focused primarily on the various factors that make the average IITian happy and those that lead to a receding hairline and a multitude of stress lines. With cases of self-harm and suicides cropping up at alarming frequencies across different IITs and the appointment of student counsellors to combat this predicament, it was imperative to know why the joy of getting into one’s dream institution wears off even before it sets in.

HOW DO STRESS AND HAPPINESS VARY?
A year by year analysis shows that happiness levels on campus are highly accredited to happenings that are relevant to the general student population. It was observed that happiness levels dropped during the transition from the freshmen to the sophomore year but showed a steady rise subsequently. One of the primary reasons for the drop in happiness levels is believed to be repentance towards academic negligence during the freshmen year. A major chunk of time in the freshman year is spent in exploring different activities resulting in laxity towards academics. The transition to the senior hostels later on means further sloppiness while adjusting to entirely new surroundings. Sophomore students alleged that difficulty in juggling between extra-curricular activities and academics led to increasing stress and decreasing happiness levels. Pressure of securing internships and third year PoRs was attributed as a possible facet to the increasing stress levels. On probing a few junior year students, it was observed that happiness levels increased during the third year chiefly due to the internship period. Despite it being a stressful period in the early stages, securing internships translated to relief from parental and peer pressure for them. It was perceived that by this time, students learn how to cope with the increasing academic load and extracurricular activities. Most of the students narrow down their interests to a few, thus being able to manage them efficiently.
The survey imputes academic pressure as the cardinal reason for changes in happiness and stress levels. When happiness levels were compared to academic performance, it was seen that as CPI fell with passing semesters, happiness levels took a spiky fall while stress levels increased. Shattering the notion that students with lower CPI would naturally be unhappier than those with a decent enough CPI, it was seen that students with 8+ CPI were equally stressed out and unhappy when compared to those in the range of 5-7; the reason for it being that the former category students also felt the heat to maintain their golden numbers while attempting to outperform others. A drop in attendance was observed with the passing years. Lack of interest in the subject and increasing dependence on self-study can be possible reasons behind students attending fewer lectures.

COPING MECHANISMS
With the amount of stress that affects the average IITian, it is necessary to inquire into how the student tries to alleviate it. To state briefly, coping mechanisms can be explained simply as an amalgamation of cognitive and behavioural efforts to reduce stress. Cognition, as a skill set, refers to a human’s ability to process thoughts that help him in interpretation and analysis of situations. Besides measuring the levels of happiness of the students, the study also tries to estimate which are the most frequently-used coping mechanisms that students – consciously or unconsciously – apply in order to relieve themselves of the stress they face. Coping mechanisms, besides being positive (reformative) or negative (maladaptive), can be basically divided into two categories – reactive and proactive coping. Reactive coping deals with the response to a particular stress while proactive coping deals with avoidance of the stressor. Since proactive mechanisms tend to be very subjective, in this survey, we look at the most common reactive mechanisms and how much they affect stress levels in students, thereby identifying the mechanisms that are significant predictors of stress (at 0.1 significance, 90% confidence interval). One of the major negative mechanisms that has proved to be a crucial factor behind stress is social withdrawal. Students who clear the JEE are usually among the brightest in their respective schools and junior colleges. However, with relative grading in place, it is natural that some students fall behind others. This may result in students feeling ashamed of themselves and trying to avoid company. Social isolation has been found to exacerbate a person’s feelings of low self-worth, shame and depression. According to the study, this mechanism – intended to reduce stresses – ends up leading to higher stress levels given the positive correlation between social withdrawal and stress levels. Another major finding of this study was that among the students who were able to cope with the stress, most of them had excellent cognitive abilities. Cognitive restructuring is a psychotherapeutic process wherein the subject tries to identify what mechanisms wouldn’t be beneficial to him/her. Cognitive skills, in this case, encompass a varied set of responses to a stress-inducing element wherein the subject tries to change his or her outlook towards the situation. Self-criticism has been found prevalent in people who come from extremely competitive backgrounds
and IITians would definitely end up in that list. Selfcriticism has always been an integral factor behind the success of students in their formative years, because the awareness of one’s own shortcomings is crucial for efforts towards self-improvement. However, self-criticism can only do so much to help one improve; in this study, it was seen that self-criticism was the most significant factor that leads to stress. Students with higher stress levels replied with multifarious responses, the most prominent of them being “I told myself that if I wasn’t so careless, things like this wouldn’t happen”. It is of utmost necessity that students try to realise where their limits lie and how far they can stretch themselves just by pushing harder. Furthermore, according to a Harvard research study, chronic exposure to situations that involve self-criticism may lead to feelings of despondency, hopelessness, and pessimism, thereby elevating risk for suicide attempts.[1] The happiness levels obtained from this survey lie between 3.92 and 4.02 with the average happiness score being just above 4, indicating that the average IITB undergrad is moderately happy and satisfied. The extremely competitive atmosphere that these premier institutes entail often leads students to believe that one can only be happy when he/she is better than the rest. Students at the either extremes of the CPI spectrum are found to be the most stressed and if we dig deeper, this result isn’t surprising at all. Constantly living up to societal and their own expectations, the high ranking students often have to make social and personal sacrifices in order to maintain their performance levels while on the other hand, there are students who have never faced such demanding and competitive atmosphere, and are not able to keep up with the rat race. Students with better cognitive skills are usually better at handling stress while the ones who face withdrawal symptoms are hit the worst by stress.

FROM THE COUNSELLORS’ DESK
Stress is an emotion which is generally accompanied with anxiety, and is naturally present within all of us in some proportion. It helps us to be positive, which in turn determines our happiness levels. We, as Counsellors, observe that both stress and anxiety, if in moderate proportion, are found to be healthy, and can help us accomplish/achieve our goals. It is only when the levels go below or beyond the desired proportion that one starts feeling uneasy, restless and unhappy. If at any given point you feel that you need more energy to keep your stress and anxiety under control, it is best that you seek help from various sources the institute offers – your mentors, faculty advisors, guide and counsellors. As, a stitch in time saves nine. 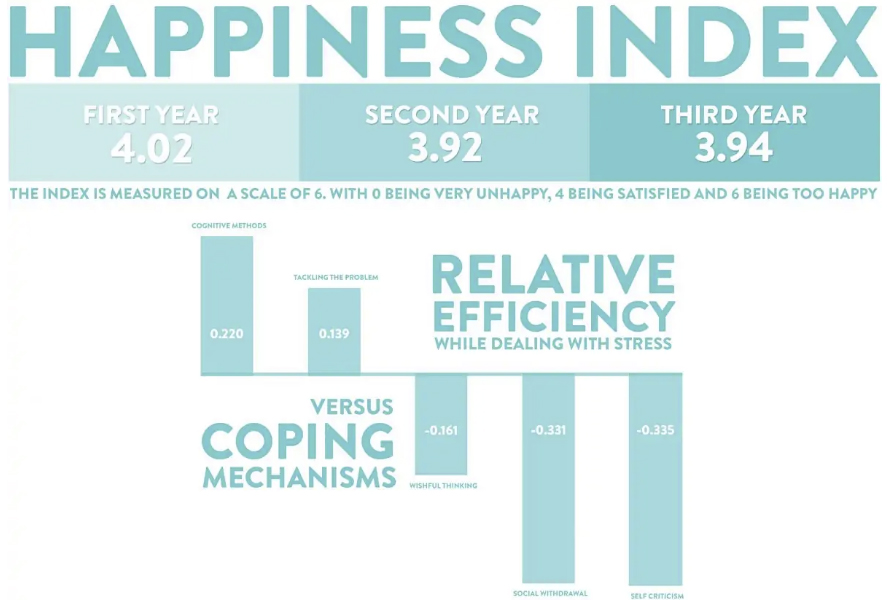 The content on this website is strictly the property of Insight and the Students’ Gymkhana IIT Bombay.